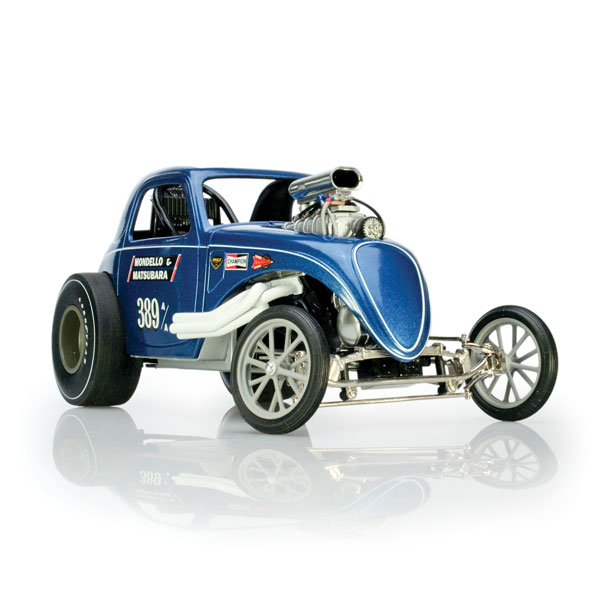 Fiat is back on these shores again, and the little 500s of today harken back to a unit called the Fiat 500 Topolino. Like the modern version, the elder Italian was among the smallest road cars of its day – and that made the aerodynamic coupe a perfect candidate for use in drag racing. That’s what Joe Mondello and the late Sush Matsubara thought, anyway, and once they swapped out the mouse motor they’d been running in their diminutive car for a blown Chevy 427, the theory was proved correct with consistent 7-second blasts in the quarter. ACME’s got the cackling little Fiat done here in fine form, in a model notable not only for its paint and finish — which are very good on this pre-production sample — but for its overall accuracy in replicating the car in its early days with rat power. That engine is accessible via a lift-off hood, and it’s done to a turn with ribbed valve covers, metallized parts, and a full-house set of wires, pipes, and cables. After checking out the open-air cockpit and scuffed slicks, we pored over a bunch of ’60s-era photos of the car at work. Though the headers and some sponsor decals changed from frame to frame and race to race, ACME’s replica brings back a great era – and a groundbreaking machine. Highly recommended. — Joe Kelly, Jr.