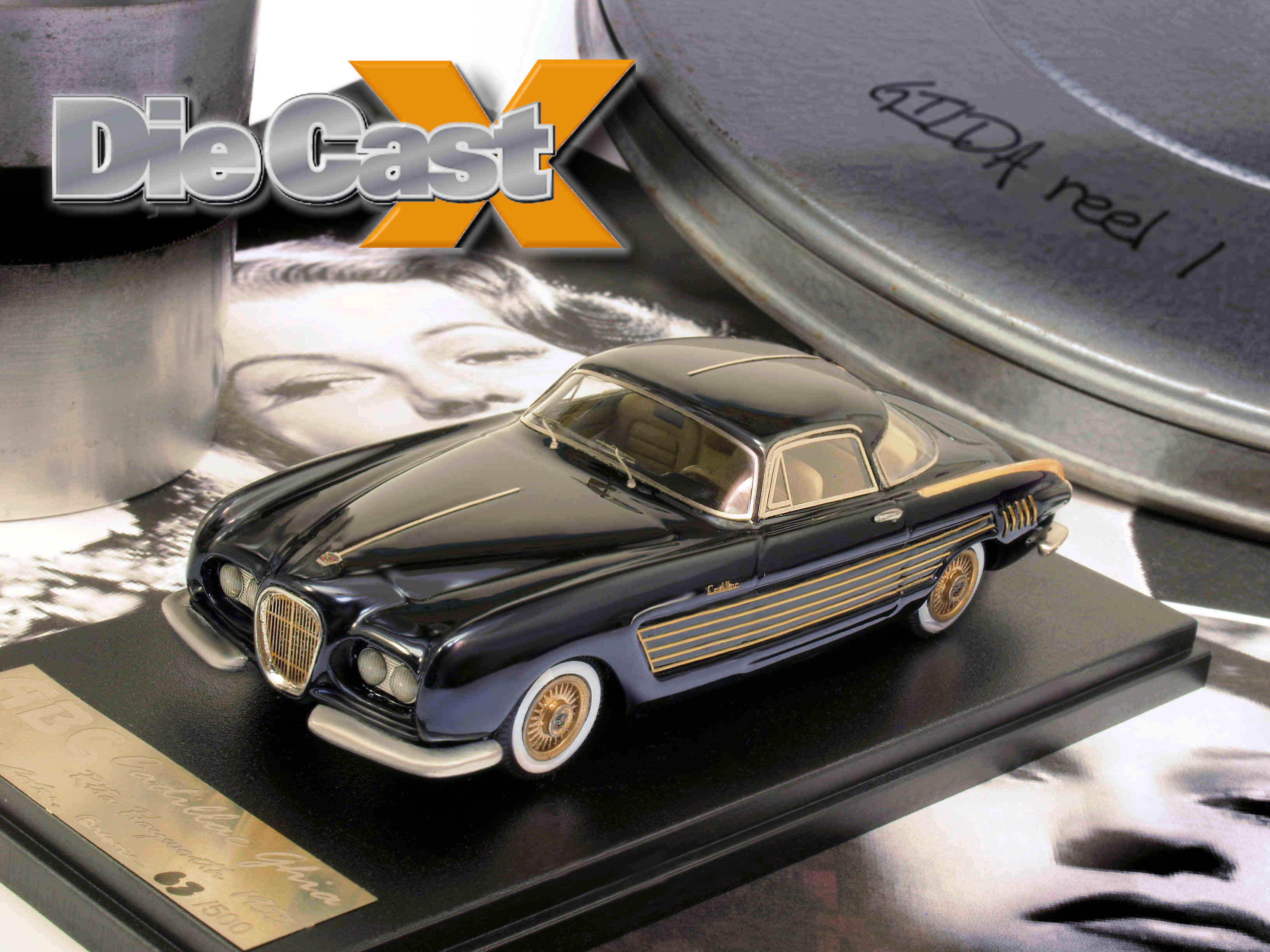 Hollywood royalty just ain’t what it used to be, especially when it comes to cars. Off-the-shelf blinged Escalades, store bought Ferraris, Bentleys, and Lambos (or their “green” nemeses – eco-friendly, celebrity-driven Priuses and Volts), simply lack star-level visual impact when heaving up to the curb. Back in the good old days, things were different – and this 1:43 resin hand-built model of a 1953 Ghia Cadillac is scale testament to just how different they were.

Carrozzeria Ghia built the original, and promptly sold it to real royalty, Prince Aly Khan – Rita Hayworth’s husband – who sent it along to the sultry actress as a gift. Based on a ’53 Caddy Series 62 frame and drive line, that first car debuted at the 1953 Paris Auto Salon (where Khan bought it); Ghia, who was trying to get Cadillac as a customer (a la Chrysler), simply made another one. Much like the close-to-identical pair of 1955 Mercedes 300SLR “Uhlenhaut” coupes, only one of which was actually driven by Rudi Uhlenhaut, both cars became known as “Hayworth” Cadillacs. The marriage didn’t last, by the way; Hayworth and Khan had both moved on by the time the car was in her driveway. Some Hollywood things haven’t changed, after all.

It took a while, but another famous Italian (scale) car maker, ABC, brought this model of the near-twin forth as a 500 piece limited edtion release a while ago. Hayworth’s car was a beautiful burgundy; the sister car (the one modeled here) is black. Patterned after the second machine, currently on display in Las Vegas (where else?), it’s a trick little thing, and it’s getting hard to find. The resin body is swoopy and fluid looking; Ghia did some serious re-engineering of the old Cad’s mounting points to get this shell to fit atop its frame, and there’s little doubt that ABC took a lot of pains to reproduce that shape, and finish the car off properly. The paint is deep – maybe a little too deep in the panel lines – but the car’s been polished up like a piano and decorated with several strips of gold-toned metal. More gold-toning, in the form of foil, has been applied to the car’s rear fender tops, and the vaguely rocket-themed taillights look like poured red resin – very cool. A handful of photoetched window frame pieces, and a neat, crisp looking set of reworked Cadillac wheel covers set the model off atop whitewall tires and a serialized, acrylic-topped plinth.

A second look brings a lot of enchantment, and a bit of wonder to folks who aren’t familiar with the car or its history. Though the heavily customized ride is unrecognizable as a Cadillac, Ghia made certain to include not only those Cadillac wheel covers, but the Cadillac crest on the car’s nose. ABC Brianza has included all of those details, and even placed a fully realized, neatly done interior and dash into the car.

If you’re new to hand builts, the occasional odd angle or misplaced bit of trim can be off-putting; and to be sure, the model’s got a few waves and ripples in its casting, especially around the grille and headlight openings. The tires are a little askew here and there, as well, and the foil-covered resin castings for the bumpers are a little grainy, especially under a macro lens. Thankfully, not many collectors regard their beloved treasures with such an unforgiving eye – and for many of them, evidence of the human hand at work is exactly what makes these models so charming. That, and the fact that no two of these manually crafted replicas are ever exactly alike.

Supplies are drying out. There’s a fervent collecting base for these, and the cars tend to appreciate heavily from their $300.00-plus entry price once stocks are depleted. We borrowed this one from Sinclair’s Mini Auto, and I have to admit, I was sorry to see it leave.

Such is the price of royalty.