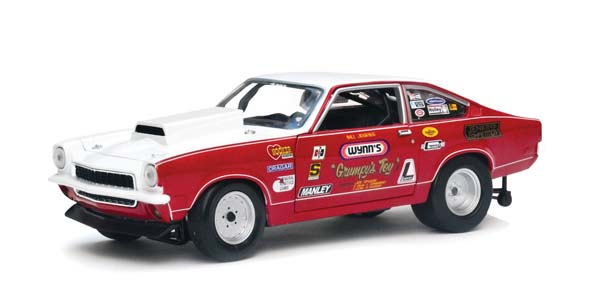 In 1972, the late Bill “Grumpy” Jenkins traded his 1970 Camaro for a ’72 Vega. Substantial chassis work was done to modify the new Vega for drag racing; subframes were added to the unibody Vega to support the front and rear suspension, the car was “tubbed” to accommodate the huge rear slicks, and a complete roll cage was installed. The radical, but fully NHRA-approved “Grumpy’s Toy IX” was introduced at the 1972 NHRA Winternationals, toting a 331 cu.in. small block Chevy engine, and a Borg-Warner T-10 transmission. Jenkins won the event, clocking in the 9.6’s and taking home his first Pro Stock Championship. Auto World’s model of the mini-monster is nicely turned out, with a red and white paint scheme, a simulated gold-leaf “Grumpy’s Toy” side deco, and all of the appropriate sponsorship decorations. The chassis features a tubbed pan, wheelie bars, Centerline wheels and the biggest set of slicks seen anywhere on a stock-bodied racer; under the “Grump Hump” sits two monstrous four-barrels feeding the small block Chevy. True, there were compromises made to the roll cage and headers – necessary to accommodate the dog-leg door hinges of the original Ertl Vega tool—but this model represents a very important step in the evolution of Pro Stock, and does so well. Recommended.  –Bill Bennett