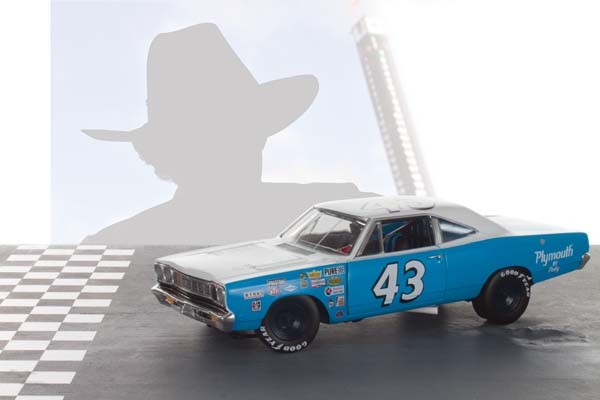 NASCAR today is far different than it was in the late 1960s. During that time stock car racing used “stock cars.” In other words, the sheet metal on the track was the same as the sheet metal in the showroom. It was also a time when nearly every American nameplate had a stake in the race — Ford, Mercury, Dodge, Pontiac, Oldsmobile, Buick, and Plymouth. The schedule was also different. The 2014 schedule started on February 23rd and ended November 16th – 38 races. In 1968 there were 49 races – six of which were on dirt tracks. One thing that is the same then as it is now is the pull of the big name drivers. In the 1960s and early 1970s, legendary names like Bobby Allison, Dan Gurney, David Pearson, Cale Yarborough, Buddy Baker, and, the king of them all, Richard Petty, swapped paint and slammed bumpers on a weekly basis.

During the 1968 NASCAR Grand National season, Petty drove the #43 Plymouth Road Runner to an amazing 16 victories, yet he finished the year third behind David Pearson (Ford) and Bobby Isaac (Dodge) in points. Following the season, Petty was shown the new Dodge Daytona that Issac and Bobby Allison would be driving in 1969. Petty pleaded with Plymouth to develop a Road Runner with the same sloped-nose and high deck wing as the Daytona. When Plymouth was unable to make it happen, Petty jumped from the Chrysler brand that he had been with for a decade and ran a Ford in 1969. The following year (1970), Petty returned to Plymouth with a special Superbird. However, truth be told, the greatest driver in NASCAR history would have preferred his 1968 Road Runner to any other racecar of the era. 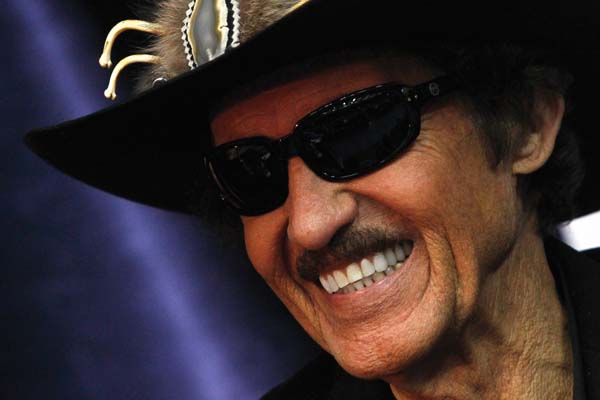 Above: To this day, the “King” of NASCAR is the most loved and respected personality the sport has ever produced. At age 77,he is still running strong attended many races and attending to his numerous charities.

The Magic of a Left

In all forms of motorsports there are but a few cars’ numbers that are forever linked to a particular driver. Indy Car has A.J. Foyt (14). In NHRA circles it’s the Funny Cars of Don Prudhomme (714) and Tom McEwen (713). And in NASCAR its Dale Earnhardt (3) and Richard Petty (43). Of all these iconic drivers, only Petty has his own paint color. The signature Petty Blue has been a part of stock car racing since the 1950s. In 1968, the Petty team added a large dose of white to the super speedway car. Auto World’s version offers this visually stunning combination with an excellent finish and it delivers a pleasing result. The transition lines are near flawless and the numbers and sponsor decals are spot-on. The rear panel has blocked-out taillights and is anchored by a factory chrome-plated bumper. A molded front grille does not feature open slots (bummer) and three of the headlights are in place with the fourth blacked-out (as it was in ’68). The running lights are still in place within the front chrome bumper — oddly, this is how the car was equipped for the big track races. The door handle and lock are present on the 1:18 version but were not part of the car when running at Daytona, Talladega, Atlanta, or Darlington. Also added were the windshield and rear glass straps. However, these are painted on rather than actual trim pieces.

The fit of the body panels is as tight as it gets – mainly because the doors and trunk do not open. The hood, minus the hood pins (double bummer), does open with a very solid fit and feel.

HEMI Under the Hood

Fishhook hinges lift and hold the classic Road Runner hood steady. When up, it exposes the race-ready 426 Hemi engine. The detail here is modest but shouldn’t draw away from the essence of the power source. Nice touches are the aluminum-colored intake manifold, special carburetor cover/air cleaner, wrinkle-finish value covers, and red sparkplug wires. There are proper engine appendages such as a silver coated alternator, black pulleys, water pump, fan belt, radiator, and four-blade fan. 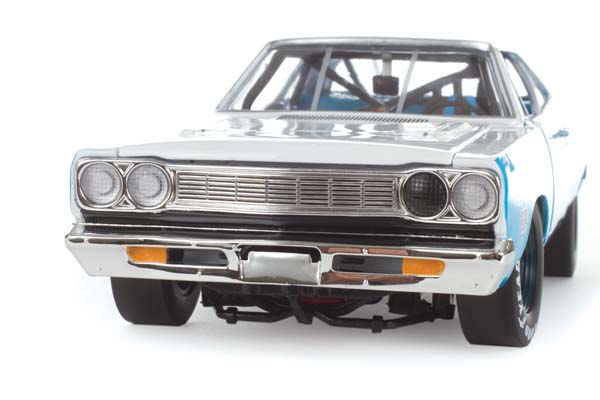 Above: If you were Donny Allison on the track in 1968, you saw a lot of this – the King bearing down on you. The ’68 Road Runner grille was a distinctive one-year only design. The stance is low and mean – just the way Petty liked it.

Safety was a Lesser Concern

Modern-day Sprint Cup cars are a marvel of safety. In 1968, Petty was barely strapped in. Auto World reproduced the basic racing interior in a very attractive fashion. The floor pan is painted Petty Blue with a matte finish, the door panels and cage are semi-gloss black, and a long flat bucket seat has been fitted with a simple four-point harness. The instrument panel is blacked-out (ouch) but detail rebounds with a cool-looking Hurst shifter and a red fire extinguisher mounted on one of the cage crossmembers. 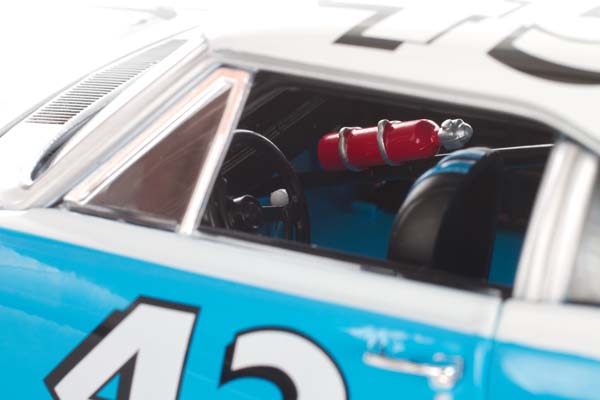 Above: The King had to contort his way into the driver’s bucket seat and strap in using a four-point harness. The Hurst shifter features a white knob. In case of fire, a red extinguisher is mounted on one of the roll cage members.

Usually, the underbelly of a competition diecast is not too critical, but not so with the Petty Road Runner. With a sealed trunk and doors, every inch of detail becomes important to the overall value of the diecast. The underside of the piece has strong pluses, as well as odd items in the minus column. On the positive are the tires and wheels. Large Goodyear racing tires have tall sidewalls and scuffed surfaces and the wheels are molded to replicate steel and painted dark blue. The fuel tank is painted silver as is the transmission. The best details are the headers with a dual side-dump exhaust finished in flat white. The downside is the screw mount dead center in the red oil pan. 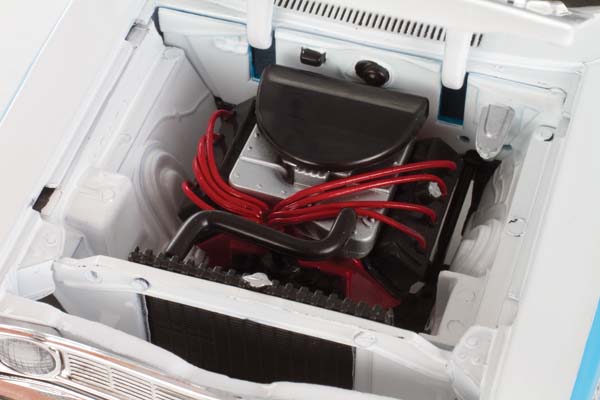 Above: Under the hood of the #43 sits a race-prepped 426 HEMI engine. Nice detail with the aluminum intake, low-profile air intake/cleaner cover, red sparkplug wires and black hoses surrounded by a white bay.

A Piece of Racing History

The biggest allure to the Auto World 1968 Richard Petty Road Runner is that it is a great-looking piece of American motorsports history. It does have a wide range of appeal. If you’re a Mopar lover, an old-school stock car racing enthusiast, or (especially) among the legions of Richard Petty fans, this would make a nice addition to your collection.