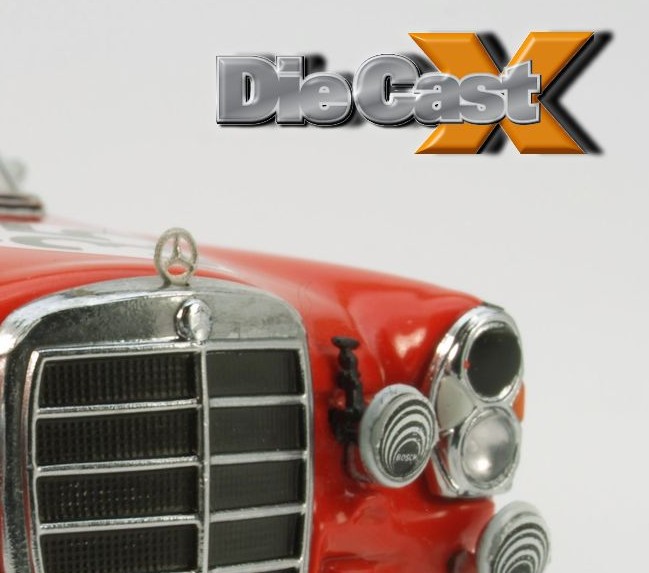 Watching vintage footage of Hans Heyer bombing around circa 1971 in a four-door, AMG-prepped Mercedes 300SEL is a lot of fun, and realizing that he had a monster 6.8 liter V8 motor under the car’s hood (all the better to suck the headlights out of his track mates) only adds to the enjoyment. Minichamps’ two car set features Heyer’s now-classic red ride next to his son Kenneth’s 2011 Mercedes SLS AMG GT3, deco’d as it raced in the twenty four hours of Dubai. Both cars are sharply cast and beautifully decorated; watching the archival footage and freeze-framing the film to check the red monster in scale had us convinced that the major stuff is all there on the diecast Benz. So is the minor detailing, like the car’s wild, wide Dunlop  rubber and Bosch-brand driving lights. The resincast SLS, though far sleeker (and somehow less menacing), has equally complex lensing front and rear, tidy grillework, and a full-race interior, and it’s topped off by a high wing held in place with photo etched struts. Both cars come affixed to a sturdy, clear-topped display base in an edition of 750 pieces, worldwide. Heyer the younger raced an SLS liveried like his dad’s car, and took 3rd at Spa in 2011; a 1:18 is on deck – but we’d love to see that car, in this scale, parked alongside the elder Heyer’s ride. Any takers? – Joe Kelly, Jr.