Several years ago, when my father-in-law died, I was put in charge of dealing with his diecast collection. There were thousands of models—far too many to ever display—all neatly organized in boxes. His collection focused mostly on 1:43 scale and included hundreds of Corgi, Dinky, Mercury, and Solido cars. They were almost all in mint condition, most of them still in their minty boxes. The only sign that they had ever seen the light of day was that most had been carefully wrapped in tissue paper before being returned to the box. 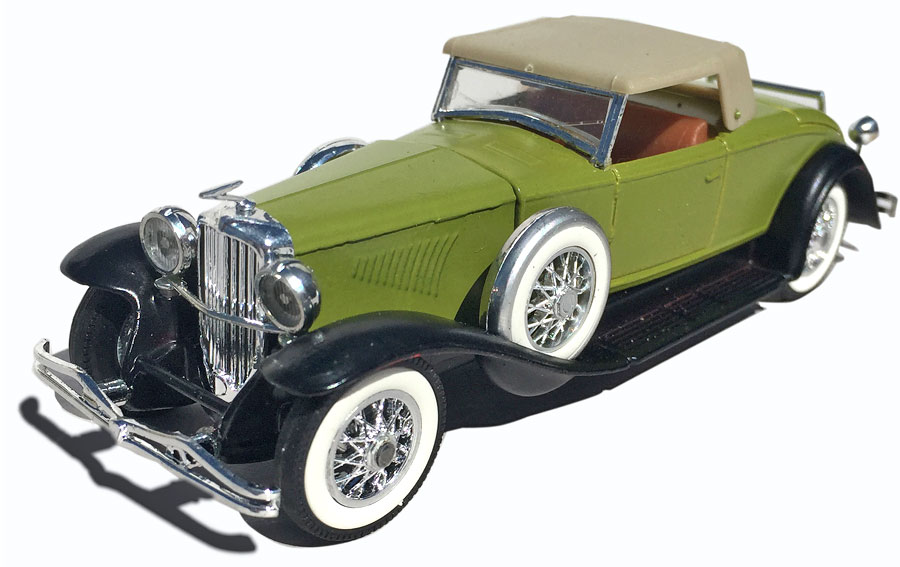 And then there was this green 1930s’ phaeton. It’s a Tiny Tonka car—part of a very popular toy series from the 1970s. It represents no particular year, make, or model, but it sure looks like it could be a 1932 Ford (Tonka’s official name for it was “Stinger”). It has racing slicks in the back—definitely not the sort of thing my father-in-law usually collected.

So why was it there?

Part of the solution could probably be found in his garage. You see, he also collected 1:1 cars. He operated several auto dealerships from the late 1960s through the early ’80s, so at various times, he owned a first-generation Cadillac Eldorado, a Pontiac Can Am, and even a Cadillac Cimarron. (Hey—they can’t all be classics, right?) He also owned an assortment of Packards, Auburns, Willys-Overlands, and other prewar classics. His particular favorite was a 1932 Duesenberg roadster, bought as a project car, back in the days when it was expensive but not obscenely priced. During its restoration, the shop asked him what color he wanted to paint it, and he asked them what the options were. It turns out that many Doozies were custom-ordered, including the option of literally any color under the sun. He liked green, so they settled on a nice apple green shade and went with it. 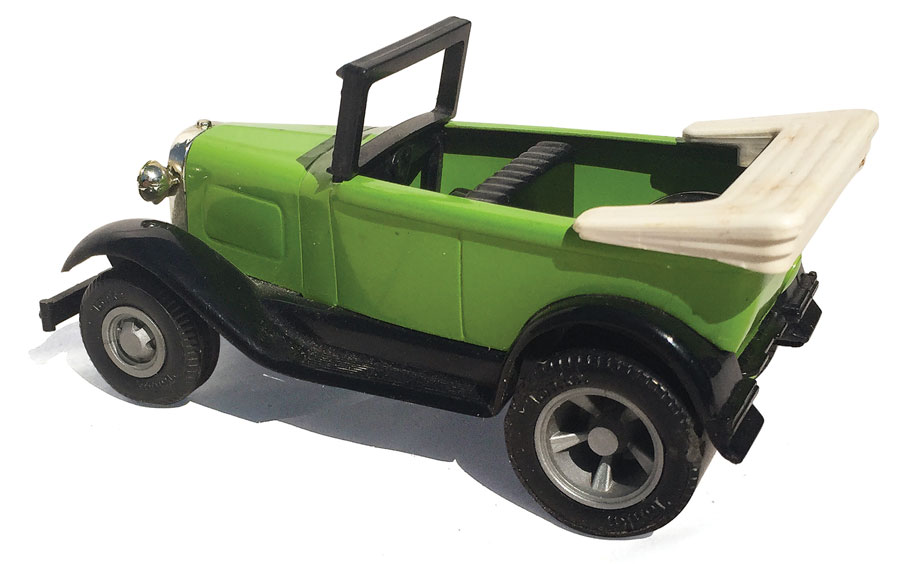 Back to that Tonka. It matches the color of his car pretty closely and also (sort of) has a similar style and vintage. As it turns out, it was a gift from his son George—probably for Father’s Day or a birthday. Of course, he cherished it.

Also in the collection are several 1:43 Solido Duesenberg J models. These more accurately represented the actual car he owned: a rumble-seat roadster with dual side-mounted spares and no supercharger pipes on the passenger side. One of them is actually green, even closer in hue to the real car. A look through Solido’s official offerings, however, doesn’t show that color. And there’s a reason why. As it turns out, several years after the Tonka gift, George took one of the duplicates from the collection and painted it to match—also as a gift. This one surely meant a lot as well since the real car had been sold a few years earlier.
Most of the collection has since been sold on eBay and hobbyDB. But rather than sell these, I set them aside. I plan to return them to George, and they’ll probably mean a lot to him as well.