Indianapolis is synonymous with the automotive world in more ways than one. It not only is the home of the Indy 500 but also has played host for the past couple of years to the annual Hot Wheels Collectors Nationals put together by Collectors Events Unlimited. From April 6 to 10, 2016, more than 1,100 Hot Wheels collectors from around the globe converged on the city with one goal in mind: to have fun with the hobby of Hot Wheels collecting.
Collectors and their families from the United States, Australia, Canada, Japan, Germany, and the United Kingdom were arriving at the hotel as early as Saturday, April 2. With so many nationalities being represented, one would think that there would be a language barrier, but not so—we were all speaking the language of Hot Wheels!
Early-bird registration started on Tuesday; collectors could sign in, get their goody bags (that included a special limited-edition Hot Wheels car), and have the opportunity to hit the souvenir sales room and get first crack at purchasing other special limited-edition Hot Wheels vehicles produced just for the event. The event was well orchestrated: The admission ticket included a list of the event cars with photos. These special vehicles were produced in a limited quantity, so collectors were only allowed to purchase two sets—precisely why there is always a high demand for them on the secondary market! 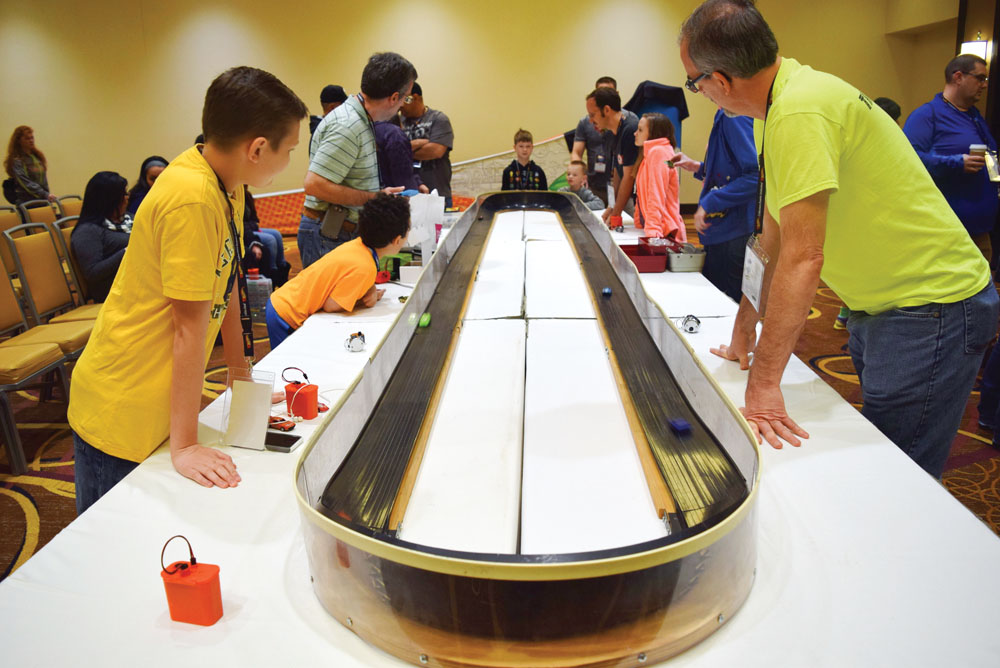 Sizzlers racing is always a big draw at a Hot Wheels event. 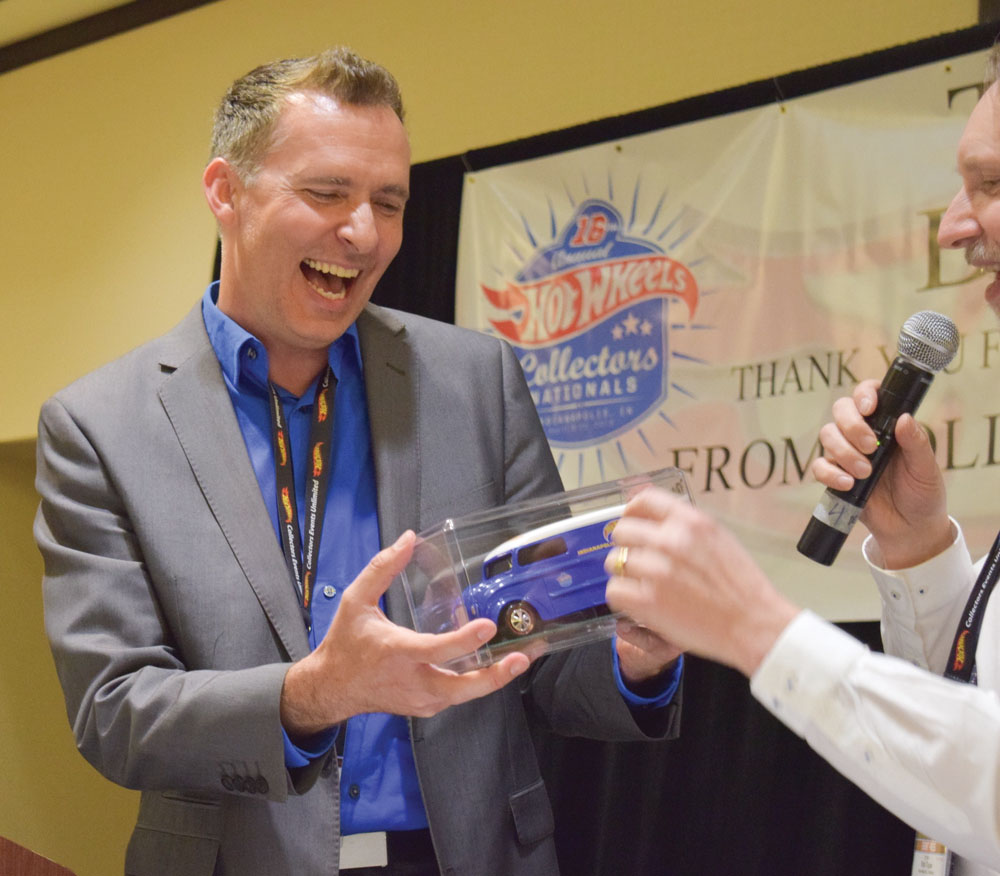 Bryan Benedict receiving his dinner-gift delivery truck at the dinner.

After registering, the next thing most people did was to get to the elevators and either post their room number if they were participating in room-to-room trading or look for room numbers of people that were. Each floor had an easel by the elevators with cards, posters, and anything else that could be written on to let everyone know what they had for sale or trade and what room they were in. Imagine hundreds of little toy stores with just the stuff you collect and having the next five days and nights to shop! If there was something that you were looking to add to your collection, there was a 99.99 percent chance that you were going to find it there—unless someone else found it before you! Room-to-room trading is one of the most exciting elements of these conventions, and you’d be surprised at what and whom you just might find when you walk into one of those many open rooms!
Some of the things you’d find are prototypes and pre-production pieces, first-shot color pieces, and even pieces that never made it to production. There were original store displays, dating back to the beginning of Hot Wheels in 1968. There were actually two different 1968 store displays at this event, and you could have bought either one or both—that is, if you had a spare $30,000 on you! If you weren’t into the older rare stuff, there were also the latest Hot Wheels releases that could be had for as little as $1. Collectors from all walks of life, young and old alike, attended. It didn’t matter who you were, what you collect, or how much you had to spend, everyone was having fun and talking about what they liked to collect.
Wednesday was the day that Hot Wheels Newsletter members got to meet and say hello to the Newsletter editor Jim Garbaczewski. Jim was there to hand out a special Nationals Newsletter Car for all members who attended the event. After that, everyone was looking for the Hot Wheels Vending Machine filled with limited-edition Hot Wheels vehicles, which collectors were able to purchase at the push of a couple buttons. The machine’s glass is frosted, so you didn’t know what car you’d be getting. It could have been a limited-edition car from Mattel’s Red Line Club or something very rare from another event, or a car with a sticker on it that said that you’d won a complete set of Super Treasure Hunts or maybe a Master Set of 444 Hot Wheels from the year before! Needless to say, the line for the Vending Machine wrapped around the room and out into the hallway every time that room was open—or until the machine was empty!
Wednesday was the official opening day, and like any other event, there was an opening reception with munchies. There was also a meet-and-greet autograph session with Hot Wheels designers, authors, pro customizers, and other diecast celebrities. Each of the celebs had full-color signing sheets suitable for framing, which they autographed and personalized to the collectors for free. Most of the designers had a drawing of one of their original Hot Wheels designs on their sheets, which make them collectible in and of themselves. Just imagine having a drawing of Larry Wood’s Ramblin’ Wrecker personalized to you by Larry himself! This year’s autograph panel included Hot Wheels designers Larry Wood, Mike McClone, and Bryan Benedict, along with pro customizer (and now author!) Chris Walker and yours truly—Hot Wheels historian Mike Zarnock. 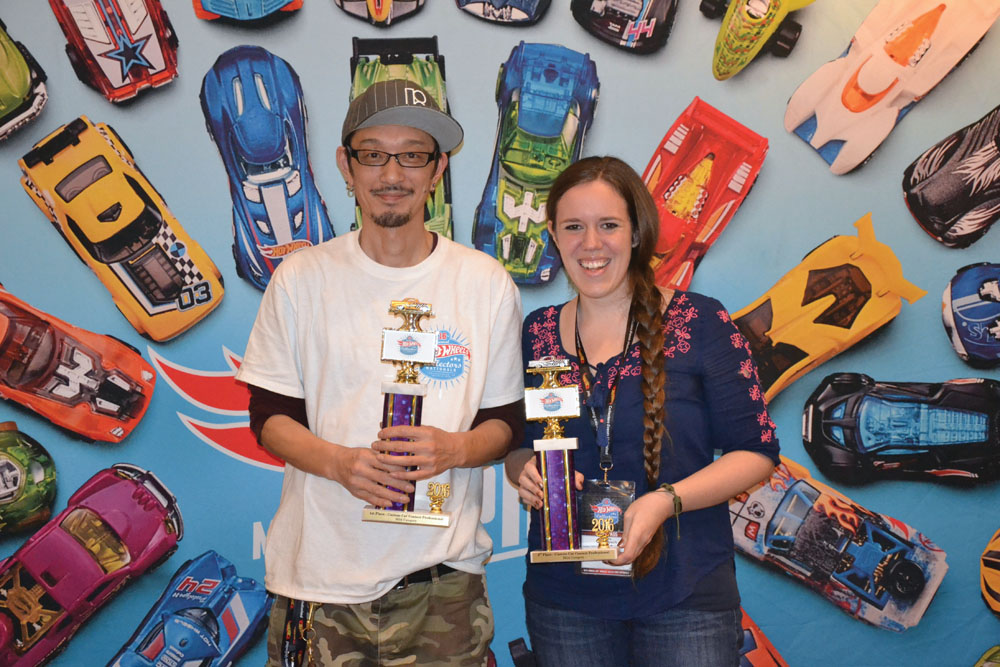 The sessions were at different times each day of the event, so everyone got a chance to get an autograph and talk Hot Wheels with all of us. Wednesday was also the night for the charity Button Bingo game. It’s just like regular Bingo but with Red Line Hot Wheels buttons. The winners received special limited-edition Hot Wheels cars produced just for that event. This is one of the many charity events for which you could purchase a ticket to play, with the proceeds going to the Children’s Miracle Network Hospitals. 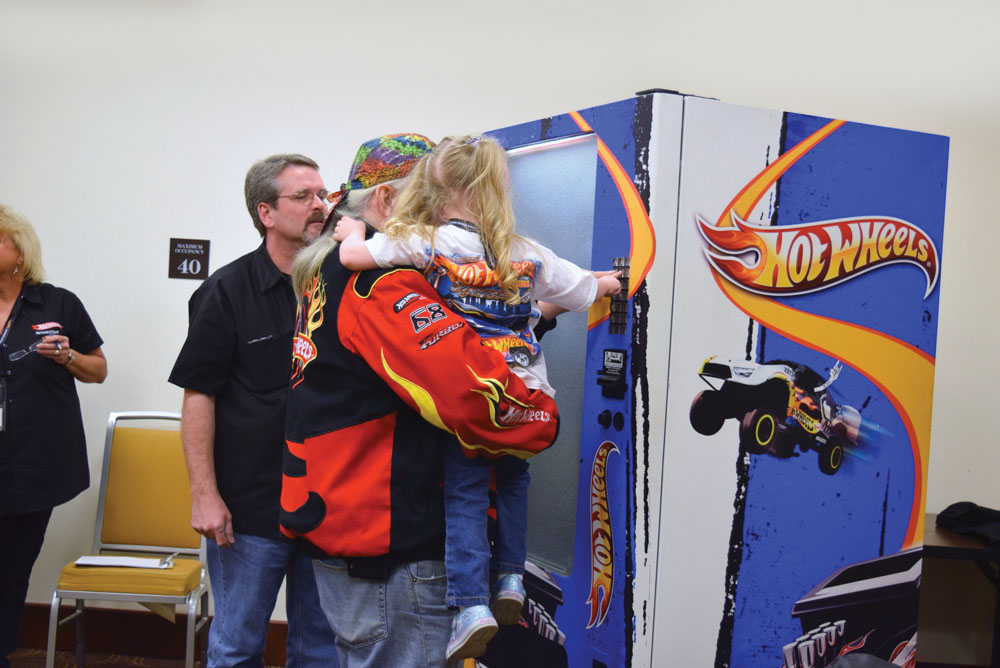 The Hot Wheels Vending Machine drew huge crowds every time it was open.

Thursday was the day that things really got going, starting with the charity poker tournament, an autograph session, and a Red Line collecting seminar. There are many good seminars at these events, and there’s always something new to learn. I was asked to do a seminar this year on insuring your collection. The afternoon and early evening was filled with another charity event, Newsletter Car giveaway, and the Vending Machine. Thursday evening was the dinner to honor Hot Wheels designer Bryan Benedict. After dinner, Bryan was presented with a large-scale Dairy Delivery built by Chris and Marcia Walker, a really superb piece. Bryan grew up on a dairy farm, so it was fitting to have a Dairy Delivery with a comical rendering of a dairy cow on it. Of course, there were also limited-edition cars for the dinner too. With your ticket, you got a bagged dinner car—a Camaro—along with a carded Mad Fast, which is one of Bryan’s designs. After the dinner, there was a giveaway of extra different-colored bagged dinner cars—five different colors altogether. 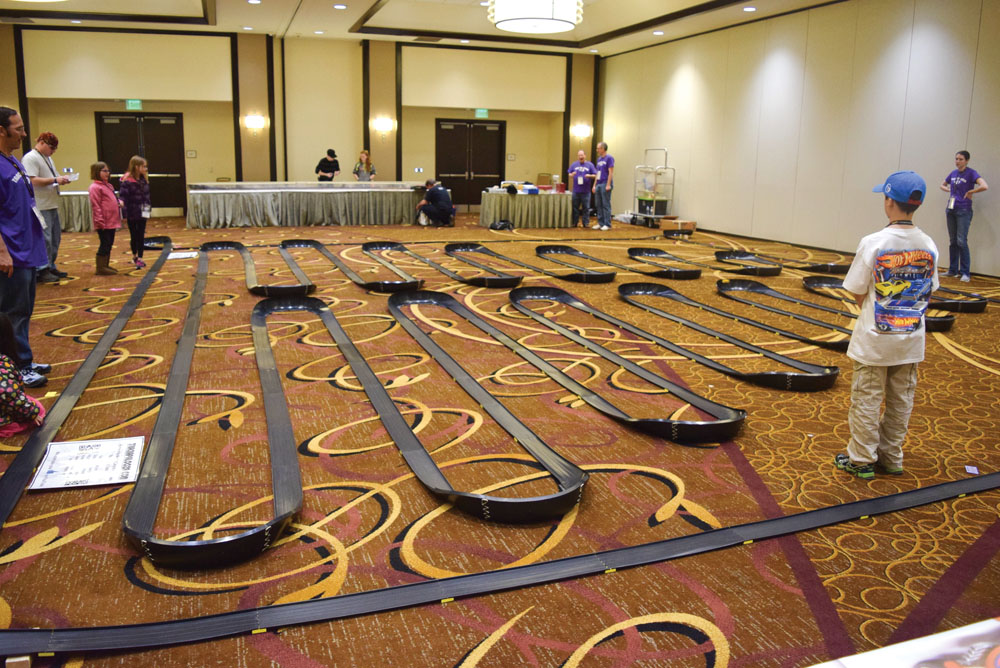 The Fat Sizzlers track, presented by Trackapalooza, measured more than 500 feet. It is the largest ever seen at an event. 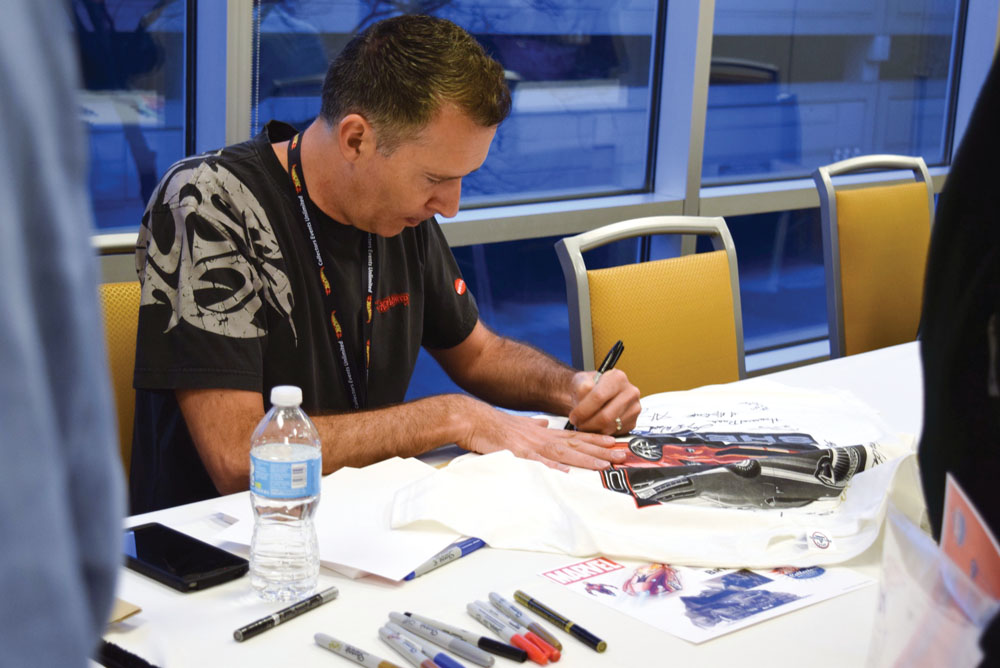 Bryan Benedict took time out from being honored at the dinner to sign autographs for everyone who wanted one.

Not surprisingly, Friday and Saturday were the busiest days of the week. Friday had practice for the downhill and Sizzlers races, an early Blackwall collecting seminar, a customizing seminar, setting up for the custom-car contest, more of the Vending Machine, and more charity Bingo. One of the ballrooms was filled with what looked like a mile of Sizzlers track—it was the largest that I had ever seen! That evening was the charity auction with all kinds of things that were donated by Mattel and collectors alike. There were prototypes and drawings along with some other rare pieces. After the auction, Mattel threw a party for all of its Red Line Club members.
On Saturday, things got rolling at 9 a.m. with the Sizzlers races, the downhill races, a Blue Car d collecting seminar, my “Insuring Your Collection” seminar, the Vending Machine, autograph sessions, a car-customizing seminar, a custom-car contest, and, for the kids, a coloring contest and a scavenger hunt. The day ended with the awards ceremony for all the events that took place that day and the event finale, which, of course, had another special limited-edition Hot Wheels vehicle given away. 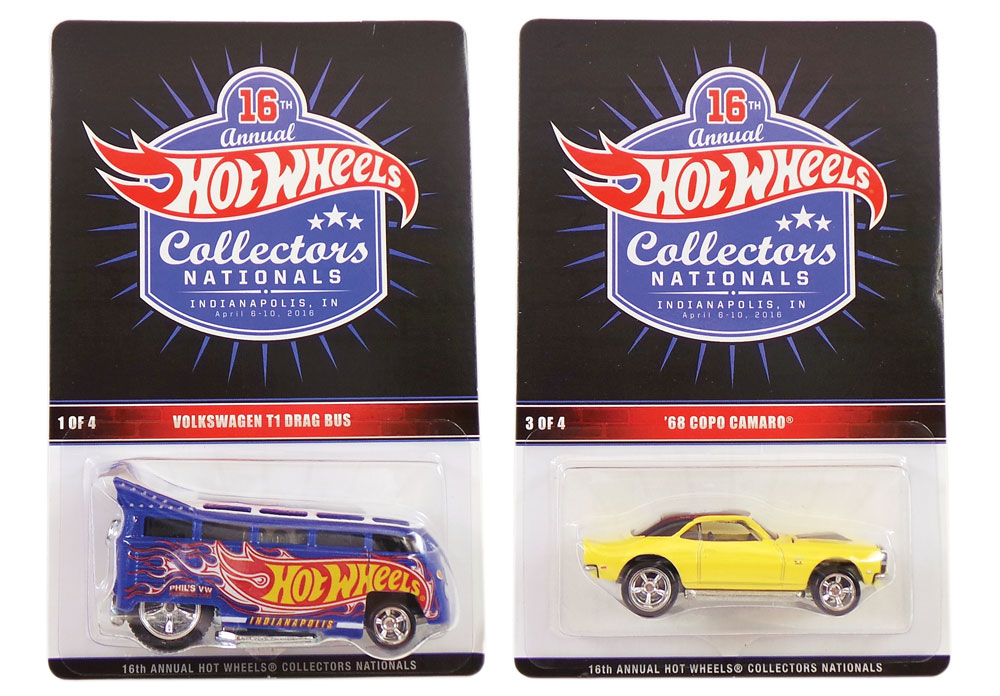 Among the special limited-edition event cars from the 16th Annual Hot Wheels Collectors Nationals were the yellow ’68 COPO Camaro and the Volkswagen T1 Drag Bus.

Sunday was an easy day for everyone—with the only things happening being the toy show (open to the public), some downhill racing, and an autograph session—as people packed up to head home. We had a wonderful time and are looking forward to attending the 30th Annual Hot Wheels Collectors Convention October 5–9, 2016, at the Los Angeles Airport Marriott. We hope to see you there too!
And by the way, all of the charity events, including the charity auction on Saturday evening, brought in a total of $76,000 for the Children’s Miracle Network Hospitals! Thanks to Jennifer and Mark Millhollin of Collectors Events Unlimited and their crew of many volunteers, Jim Garbaczewski and Carl Pomponio of the Hot Wheels Newsletter, Jonathan Robles for his photos, and, of course, the people from Mattel: Bryan Benedict, Larry Wood, Mike McClone, and Jimmy Liu. Hats off to everyone involved!  ✇