Working outside the mainstream is nothing new for JL. Consider these two unlikely 1:64 scale heroes, the 1969 Rambler S/C and Rad Rods by Troys Rumbler.

To travel the road less taken can often be a bumpy and trying journey. If you make it through to the other side, you can truly call yourself a survivor. In the diecast world, Johnny Lightning is the definition of a survivorthe brand that just refused to die. .

Launched by Topper Toys just a year after Mattel introduced its Hot Wheels brand, Johnny Lightnings early marketing strategy was to take pages right out of the Hot Wheels playbook. Like Mattel, Johnny Lightning offered track sets as well as individual cars. In early 1970, Mattel agreed to sponsor two drag racers (Tom McEwen and Don Prudhomme); a month later, Topper stepped up and sponsored a fleet of Parnelli Jones Indy racers, including the ones driven by champion Al Unser in 1970 and 71. When Unser won the Indianapolis 500, sales of Johnny Lightning cars jumped. Still, sales lagged far behind Mattel by a ratio of three to one. .

Johnny Lightning (JL) always took risks by releasing diecast cars that were completely off the radar of Mattel, Matchbox and every other diecast maker. The Hot Rods series, for example, had one of the best selections of pro-built rods and customs that included oddities like Troy Trepaniers Rumbler and Thom Taylors FrankenStude. The decisions to cast what others overlooked included alternative muscle cars such as the 1969 Rambler S/C and AMC Rebel Machine and AMX. .

The next turn in the JL road came in 2005 when Playing Mantis was acquired by RC2. Within a year, RC2 completely revamped the Johnny Lightning image in an attempt to increase retail space and market share. Aside from expanding the 1:64 scale line, a major agreement with Chip Foose put the Full Throttle releases under the brands umbrella. While the 1:64 Foose line was of nice quality, the larger 1:24 scale versions were a bust. In 2007 came the announcement that RC2 was getting out of diecastonce again leaving the JL status up in the air..

The Johnny Lightning brand was spared when several brand managers, including Tom Zahorsky, convinced RC2 that the line was still viable and had developed a fairly strong collector base. The name/product line was moved to an RC2 subsidiary called Learning Curves..

Today, as always, Johnny Lightning continues to take risks and map an aggressive course for developing collector interest in an otherwise Hot Wheels-dominated world. Under Zahorskys design leadership, new alliances have been formed, and the brand is once again thriving. Through it all, it has been easy to forget that 2009 marked the 40th year of the brand. And, after all this time, Johnny Lightning still isnt afraid to travel down the road less traveled and face the challenges of being a survivor. 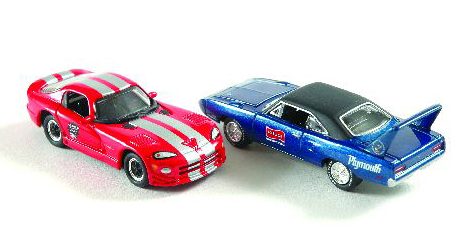 164 Street Captions: Working the premium market is something Johnny Lightning has learned to do quite well. These recent additions are from the Kruse Auction line  now available at selected retailers.