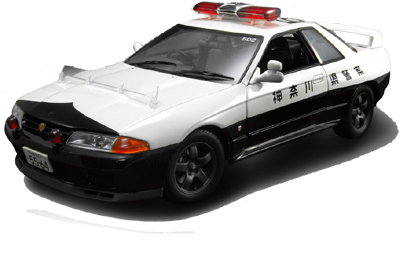 Not much hope of outrunning the long arm of the law when they are driving one of these hot Nissan persuit cars. With close to 300 horses from its turbo inline-6, AWD and a super sophisticated suspension, the Skyline GT-R has been the top Japanese performance car for a generation. Kyosho has announced a pair of police versions based on its excellent 1:18 casting of the R32-spec Skyline. Detailed interior, engine and undercarriage complement the sharply cast and expertly painted body.

Also announced and soon to be released are two versions of the 1:18 240Z in police colors.